Last week we went for big Day 2 of shooting.  Now I need to get production insurance, and a permit from the U.S. National Forest Service, since Mt. Hood Meadows (and the other resorts) are on US Forest land.  It was another beautiful fall day, though the forecast called for the first snow of the season later on that weekend.  We shot in the clear fall weather.  Then on the weekend we went up, hoping to shoot with the car mount.  We did get to shoot with the car mount, though it was raining, then snowing, as we did so.  And then the car battery died.  After getting a jump from a friendly local cop heading up into Rhododendron, we continued driving with the car mount into increasingly snowy mountains, blanketed in fresh snow. But we couldn’t stop to shoot for fear of getting stranded with a dead battery! So some interesting car-mounted video is all we have from the first snow. But we did make it back to town, got a new battery, and will live to shoot another day.

Ben and his assistant prepping to shoot in the parking lot 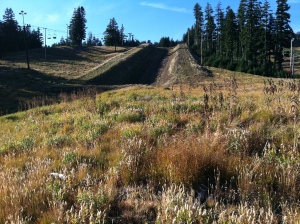 The halfpipe, a serene beast waiting to devour

Securing the car mount. It held fast like a good friend through the snow.